Paul Clift's Flying Fish has the longest length and smallest beam permissible under the rules, and as can be seen from the lines, these dimensions produce a very easy and sweet-lined canoe. But when we look at the lines of these light and very fast sailing hulls we must always bear in mind that they plane two-thirds of the way around a triangular course, and even close reaching will get up and scoot along the top of the water, and for this reason their lines must be studied from a different viewpoint than that taken when studying an ordinary sailing craft.

The sections are V'd forward, and are gradually flattened as they go aft where they are almost flat. The buttock lines also carry this out for they come down steeply forward, and then run aft almost parallel with the keel line, this giving the long flat run, necessary for planing.

Paul, who is unquestionably one of our finest canoe helmsmen, and I, hoped that Flying Fish would be the fastest ever designed and built. Actually, the only important cup she has won has been the Quincey Cup, and this I think is due to the fact that while she is undoubtedly fast, she is most difficult to sail, so that her helrnsman has to spend almost all his energies and thoughts on pure sailing, and has little left with which to study the course and the problems to be found on it. The same thing occurred when Roger de Quincey and I challenged for, and won, the National Championship of America and the New York International Canoe Trophy. The canoes against us there were fast and easily driven, but they took so much of their heimsman's brain and his strength of limb, that we in the heavier and more comfortable boats won enough races to bring these trophies home to England. So while I think these lines we are now looking at are very fast indeed, I do not think they are fast round a course, and the moral of all this is that designers must put into the hands of helmsmen instruments, which, while being fast, are well within their capabilities, so that plenty of spare energy, both mental and physical, is kept in reserve, for the planning of their race and the sailing of it, enabling them to conduct operations in a seamarlike manner rather than in a state of feverish excitement throughout. It is probable that future canoes in this country will be to the maximum beam, such as Wake, whose plans can be seen in my last book, and who successfiilly defended the New York Canoe Trophy against last year's challenger.

The arrangement plan shows she is very similar to Wake in construction and lay-out, the difference between the two being that Flying Fish has a keel case which runs the entire length of the boat, whereas Wake's stops short forward. The after hatch is arranged a little differently, being placed right in the stern and enabling any water to be sponged out as the canoe lies on the slipway, this one hatch taking the place of the two just forward of the rudder on Wake, so this year's canoe designing and building in Britain has continued the lesson we learnt in America, which is, that while the narrowest canoe possible is very fast, it is so difficult to handle that a good man in the widest canoe possible to the rules generally wins the race, as he has time and energy enough to study the winds, weather, tides and everything that is happening in the race, and the advantage this gives him, more than makes up for the slightly higher speed of the narrower canoe under certain conditions.

This was borne out also by the races in America, for it will be remembered that after Gordon Douglas had unsuccessfully challenged for the New York Canoe Trophy last summer I presented him with the complete plans of Wake, and Merrill Gilbert built from these plans, but instead of building her of double skin, as we do, she was built of single thickness planking with rib and batten construction, the builder making a first-class job of her. Gordon christened his new canoe Foxy Nymph, Nymph being the name of his old canoe. As can be imagined she created a great deal of interest and the first race was awaited with much anxiety all round. The first race was twice round Sugar Island, and this new canoe and Loon had a dingdong race the whole way round, Loon finally scraping home by fifteen seconds. The next race was for the Crane Trophy, and as this was in a good breeze Gordon won it easily, then came the Butler Cup and Gordon won this, Leo Friede being second. Then came the trophy race on Friday afternoon, but the wind was too hard for most, and so it was postponed until the Saturday afternoon when there was a light breeze, and Rolf Armstrong won this race fairly easily in the light going. Gordon in the new canoe was fifth and sixth for half the race, but when the breeze came a little stronger he began to travel fast, and passed all those in front of him except Rolf Armstrong, who was too far ahead to be caught.

The second and third races for the trophy were held in a good breeze, and as was to be expected Gordon won these two easily, Rolf Armstrong finishing second in one and fifth in another.

All of this brings back to my mind the pleasure that our visit to Sugar Island gave us in 1933, and recalls the many kindnesses shown to us by the American canoeists, and I only hope that some day I shall return amongst them, even if not as a racer, just to spend pleasant hours among them.

The Mab trophy was won by Mermaid II in a very light wind, and as this was for 16 ft. x 30 in. canoes Foxy Nymph was not eligible, and so we see that once again the beamiest canoe came out top.

The Royal Canoe Club's headquarters are at Teddington on Trowlock Island, and while no doubt back in its early years this was an ideal sailing ground, it has been so built round that it is very difficult indeed to sail a canoe there unless the wind is up and down the river, and for several seasons past the members of the Canoe Club have been wandering round to different places to find more suitable sailing waters. 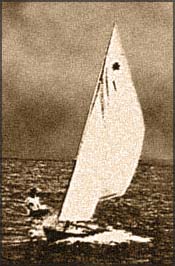 On the other side of the Atlantic, Gordon Douglas won the American National Sailing Championship, the Crane Trophy, and the Paul Butler Trophy with Foxy Nymph, built from Wake's plans.

In these years they have tried Frensham Pond, Cowes, Aldeburgh, Langston Harbour, and have finally settled on the Sandy Point which is the eastern end of Hayling Island, for just inside Chichester Harbour there is a wonderful sailing spot at high-water, and as most important races have a time limit on them they can be sailed when all the flats are covered and there is water almost everywhere. In addition to this the Hayling Island Sailing Club has built a fine new clubhouse wherein the canoes can be stored, cars parked and the Canoe Club members housed and fed, and so most of the sailing this sunlmer has taken place here, though as in years gone past they have trailed up to Aldeburgh for a week's sport there at the end of August.

Throughout the season the sport was good, for no canoe was outstanding. The new Flying Fish while being very fast reaching, has so little stability that her owner spent a great deal of bis energies controlling his unstable mount, and on a wind she was almost always outpointed, but as she was travelling fast there was not much in this excepting short tacking when having to tack more often than the rest she lost to windward. Radiant was tuned very efficiently and seemed to be a fast all-round boat, while Wake's new owner has still to get really used to her, for in the winds that suited her he had Gallant and Solitary Snipe both sailing extremely well to contend with.

The 16 ft. Defiant is equal to Flying Fish in light weather, and sails very high on the wind, but being of the minumum length and beam she is the first of the fleet to get out of control when the breeze comes a little stronger, and with these points before us it is therefore not surprising to see that the cups were shared out very evenly, for no canoe was outstanding.

The standard of canoes and canoe sailing is now higher than ever before in the history of the Royal Canoe Club.

Billy de Quincey with Gallant, whose lines appear in my second book, won the Challenge Cup, Paul Clift with Flying Fish won the Quincey Cup, while Bee Macltinhon took the Murphy Howard Cup in Defiant. The Seamanship Cup was won by Billy in Gallant and Cyril Stollery won the Novices' Cup with Radiant, and Radiant took the Mates' Average. So ended one of the best sailing seasons the Royal Canoe Club has had, for not only have they fast and seaworthy canoes, but the standard of sailing is higher than ever before in the Canoe Club's history, and had America, as we hoped, challenged for her New York Canoe Club International Trophy, which is still this side of the Atlantic, it would have been extremely difficult to choose a defender for it, so well were the canoes and canoeists matched.

* Cyril only beat Paul by 1/16 of a point for this trophy. This, and the way the cups were shared out, show how close and keen the canoe racing was during the summer of 1937.