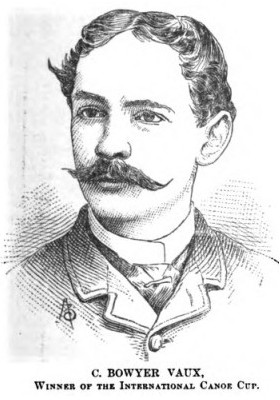 The International Canoe Challenge Cup offered by the New York Canoe Club was finally won on the 8th inst. By the Canoe 'Lassie', owned and sailed by Mr. Calvert Bowyer Vaux, of this city, whose portrait is published in this issue. The first two races occurred in the 4th inst., and were won respectively by Mr. Baden Powell's 'Nautilus' and Mr. Vaux's 'Lassie'. This necessitated a third race, which was attempted on the 6th, but as the distance was not covered in the required time, the 'Nautilus', although crossing the line first, failed to secure the cup, and in the next attempt, two days later, as has been said, victory came to the American Canoe. It was an existing race, and the enthusiasm of the New York Canoe Club in the victory of the 'Lassie' over her two English competitors knew no bounds. It was a noticeable fact that Mr. Baden Powell adopted and imitated the tactics of the Yankee skipper in sitting out to windward on the deck of his canoe, instead of lying flat in the cockpit, after the English method.

Mr. Vaux, who has won the International Cup, may be regarded as a typical American canoeist. He is a son of Calvert Vaux, the well-known architect of this city, and he has been devoted to the paddle and the sail ever since he was a small boy at a Massachusetts boarding-school. His first racing canoe, which he purchased in 1877, was built on lines sent to America by the same Mr. Baden Powell who was his chief competitor in the recent contests. The following year he purchased a "Shadow" model canoe designed by Mr. W. L Alden, now United States Consul-General at Rome. This was the third "Shadow" canoe ever built by James Everson, of Williamsburg, and it proved to be a remarkably speedy craft. It was named the 'Dot', and after its owner joined the New York Canoe Club, and began to take part in their races, the number of prizes won by the 'Dot' were almost beyond counting. She raced for three years for the New York Canoe Club Challenge Cup, and finally won the five races necessary to its possession [Editors note ï¿½ Not the International Challenge Cup!].

In 1884 the 'Dot' was sold, and was taken by her new owner to Florida waters, where to-day she is said to be ever in readiness for a race. Mr. Vaux's next craft was called the 'Sea Bee', but fining it too large to handle conveniently, he replaced it in 1885 with the now famous 'Lassie'. The 'Lassie' won her maiden race at the New York Yacht Club's fall regatta in October last, and later a cup offered for canoes by a member of the Jersey City Yacht Club. Mr. Vaux has been an unusually successful sailor, and is the possessor of more prizes than any other canoeist in the country. He has edited the 'American Canoeist', a monthly paper devoted to this sport, for two years, and is also the author of 'Canoe Handling', a little text book telling how to use and keep canoes. He was born at Fishkill, New York, in February, 1855.

This report was originally published in Harpers Gazette, September 18, 1886. The understanding of the editor is that works of this age are in the public domain under United States Law.