Apologies: in the very first sentence of the post above, I missed out the crucial 'not': Tony thinks it is NOT the intention to ban series replacement.
Top

Thanks Perham for re-directing my query from the general UK forum to this thread under 'developments'.

Like others I have two dagger boards that are not identical but both fit my new rules boat GBR 326. The older one, a spare from a previous boat, but still made by Bloodaxe Foils, is slightly larger in area but not length. Ever since I broke a daggerboard at Sundersfoot I have seen the value of having a spare. We need a rule that unambiguously allows replacement of a conventional daggerboard and a rudder during a competition, especially after a breakage. The proposed rule change may leave things too open to interpretation whatever is the intention of those proposing the rule change.

As a young man (i.e. before turning 70 three years ago) I had great fun in a foiling Moth but I definitely think it would be a mistake for the IC to go down the foiling route. One thing foiling did for the Moth was spoil sailing in lighter winds at least at first. Nobody much wanted to sail in sub-foiling wind strengths resulting in some open meetings at which nobody turned up. So we need a rule to prevent the IC becoming a foiling boat. Can we not just say 'hydrofoils are banned' or is that too simple a solution? Leave foiling to the Moth.

Might this not be a rule to prevent multiple exotic sytems masquerading as "Accessory Centreplates and rudders" being shaped in such a way as to act as lateral foils, (such as seen here on "Wild Oats") 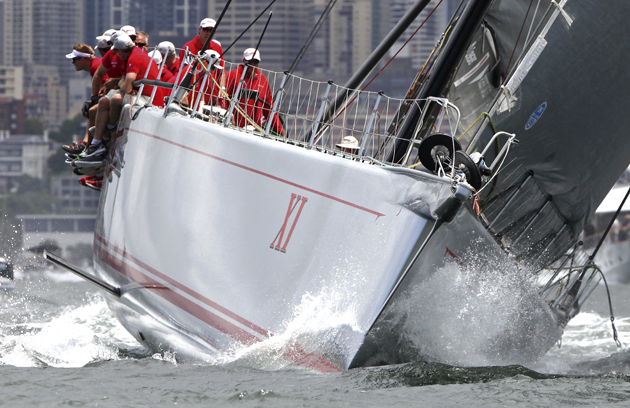 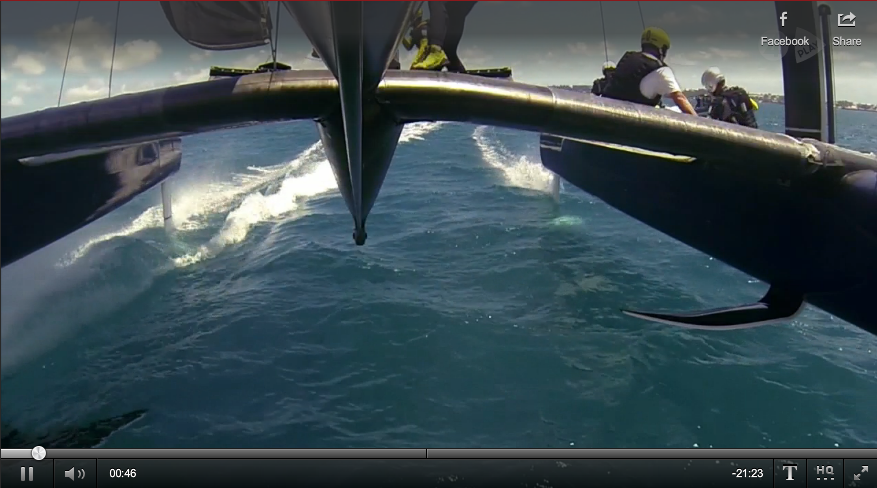 such as found their way around the class rules in the AC 60's used in the Americas Cup?

Development is all well and good but can run the risk of turning a class fleet into a minority experimental class.
Michael Brigg

It would certainly be a good thing if we were all voting for/against rules with the same thing in mind. My own feeling is that if the problem is seen as changing foils mid event then it would be best dealt with in Sailing instructions: something on the lines of

"Centerboards and or rudders may only be changed during the event with permission of the RC, which in case of urgency may be retrospective. Permission will not normally be granted unless the original is significantly damaged."

As has been highlighted preventing foil changes in a year long club series could be considered harsh.

However I can also imagine multiple angled boards being used for dynamic lift, so either interpretation is possible.
Top

I've merged the posts in the UK forum in with this one...
Top

Having been the person who started this by saying we needed a tighter rule perhaps I should comment.

The changes to rule 9 are aimed to ban hydrofoiling, When taken with the rest of the rules this IMO is enough to prohibit foiling.

I am not sure about the proposed rule 10d. Is this banning the kind of adjustable foils that the Int 14's have? Would this restrict us to fixed angle foils like the old lowrider moths had?

Now for those who have a car full of spare parts: As I see it if you are at a regatta and you broke a centreboard or rudder you would need to ask the race committee permission to use a replacement. I think what we are trying to achieve is that the replacement foil must be similar. ie: a non foiled rudder could not be swapped for a foiled rudder.
________________________
Chris Hampe
GBR 340 Monkey's Uncle
Top

The main intention of making it explicit that only one centerboard and one rudder is allowed is to prevent the possibility of a second “rudder” with hydrofoil being used (placed near the centerboard, at the bow or somewhere else) with a second rudder hung on the stern to create vertical lift to carry 100% of the hull.

It also addresses the possibility of the need to have multiple sets of foils for different conditions (as is happening in the Moths).

The ICF Sailing Committee has no intention to limit the number of centerboards or rudders that a sailor may have. The intention is that during the course of a regatta a competitor has to decide which foils to use, and not swap them from race to race depending on conditions. If someone has a breakage during a regatta, they can ask permission from the race committee to use a replacement.

Finally, the underlying objective of the ballot is to get the views of IC sailors on whether they want to rule out the possibility of foiling boats and place some limitations on the use of hydrofoils on rudders. The proposed rule changes have been subject to lengthy discussion by the ICF Sailing Committee over the last year, reflecting that it is no easy task to formulate a rule that allows continued innovation and development, but cannot be exploited in an unintended way. If it becomes apparent through comments raised during the ballot process that the detailed wording of the rule change could be improved this is something the ICF Sailing Committee will consider.

In early moth T-foil days, we used reversible daggerboard rudders - so you could have a 'normal' blade for light winds, or turn it upside-down, and have a T-foil for when it's choppy or windy.
This would be a simple workaround to the proposed new rule.

However we found that for 99% of the time, it was better to use the T-foil to stop pitching, even in very light condtions (on a much shorter lighter boat.)
Top

'Hydrofoils' includes both horizontal and vertical foils. - and anything inbetween.
limiting to one 'hydrofoil' would make sailing a bit difficult.
The equivalent flying term 'aerofoils' would include wings, tailplane and vertical stabiliser.
Top

I am in favour of what the rule changes are proposing, viz.:

However it is clear from the comments above that the rules as drafted are open to different interpretations. Is the ICF SC going to amend the proposals or do we vote on them as written?

As an aside, I don't think reducing AC weight will have much effect, other than psyche out those of us with boats which meet 89.5 kg without correctors.

Peter
GBR280
Despite the high cost of living, it remains popular
Top

What about the foiling scow ( or AC cat ) configuration, that has no ' centerboard ' but has leeboards, with lifting surfaces. ?
It's tricky to write the rule without loopholes.
Top

A reminder that responses to the Ballot must be returned to your National Class Association by 15 February.
Phil
ICF Sailing Committee Chairman
Top

I have now collated the results of the worldwide ballot and can confirm that all the proposed rule amendments have been carried, by a strong majority.

Some sailors were against a number of the rule changes, but only in one case (Rule 9d) was the number sufficient to change the country block vote to a No (each country's block vote may not be split).

During the course of the ballot procedure, some sailors raised concern about the interpretation of Rule 9a (only one center-board is allowed) and Rule 10a (only one rudder is allowed). The ICF Sailing Committee have further considered the wording and have amended them to read:
Rule 9a Only one center-board shall be carried
Rule 10a Only one rudder shall be carried

These Rule amendments have been forwarded to the ICF and it is anticipated they will be considered and hopefully ratified at the ICF Board meeting April.

I am pleased to advise that the ICF Board has ratified the rule changes. The Sailing Committee has also taken the opportunity to clarify a number of the other rules, where it had become evident since they were adopted in 2009, that their meaning was open to varying interpretation, or difficult to measure or enforce effectively.

For convenience, all the amendments are set out below. They will become effective from 1 January 2017. A new set of rules incorporating the amendments will be published by the ICF in due course.

CHAPTER II
ADD TO ARTICLE 6 Unless otherwise specified in the Sailing Instructions, during a competition only two suits of sails, one center-board and one rudder may be used, except in the case of breakage if dispensation from the race committee is granted.

APPENDIX II
3. ADD New innovations shall conform to these rules and owners are encouraged to seek any necessary interpretations of rules from the National or International Federation before building.
Measurers shall refer to the National Authority innovations that may breech the ‘Spirit of the Rules’ in any way and withhold the signing and issue of a measuring certificate until clarification has been obtained.
5e. REPLACE WITH The outside skin of the hull shall contain no hollows greater than 1mm over an area of 2000mm by 1000mm centered on the BMS. The 2000mm dimension shall be measured fore and aft and parallel to the centerline, 1000mm dimension at right angles to the fore and aft centerline. The two dimensions used to form a rectangle on the hull in plan view. The area of the hull contained within this rectangle shall be checked for any hollows greater than 1mm with a string line pulled tight against the skin of the hull both in the fore and aft plane and moved out board, parallel to the centerline on each side, and in the athwartship plane moved fore and aft perpendicular to the centerline.
9a. INSERT AT BEGINNING Only one center-board shall be carried.
9d. ADD NEW RULE Devices that create dynamic vertical lift on the center-board are prohibited.
RENUMBER EXISTING 9d as 9e (There are no restrictions on the design or materials of the centerboard other than the above rules)
10a INSERT AT BEGINNING Only one rudder shall be carried.
10d. ADD NEW RULE The rudder may have a hydrofoil configured such that it can develop a vertical dynamic lift component while sailing. It shall comprise one lifting element that may be divided by the rudder. It shall be rigidly fixed to the rudder and shall not have any moving parts, flaps or other such devices. A rudder with a hydrofoil shall be used with the hydrofoil immersed below the surface of the water.
RENUMBER 10d as 10e (There are no restrictions on the design or material of the rudder other than the rules above.)
11b. REPLACE WITH The boom excluding fittings shall be capable of passing through a circular hole of 100mm diameter. A boom used for the foresail excluding fittings shall be capable of passing through a circular hole of 30mm diameter. For wishbone booms used for mainsail and/or foresail each side of a wishbone shall be measured separately and shall comply with the same limits.
11e. AMEND TO READ No sail shall have its luff set more than 6360 mm above the underside of the hull
11f. AMEND LAST SENTENCE TO READ No sail shall have its luff set above the underside of this band.
11h. AMEND TO READ The mainsail shall be capable of being lowered and removed from the mast and hull with the canoe floating freely in an upright position without the use of tools. Devices that lock the sail to the mast head shall be operated from deck level.
12b. ADD AT THE END OF SECTION 12b No part of the mainsail shall extend beyond the projection of a line drawn at 110 degrees from the head measured from the luff. A triangular template with edge lengths measuring 300mm, 300mm, and 492mm may be used for the purpose of checking this head angle.

APPENDIX III
AMEND SECTION ON HULL TO READ Hull weight shall be in accordance with Appendix IV Rule 5f. It shall include spinnaker pole and fittings.

So the bms only exists in one 2d athwartships line, and not the entire 1000 by 2000mm rectangle?
Top
Post Reply
30 posts